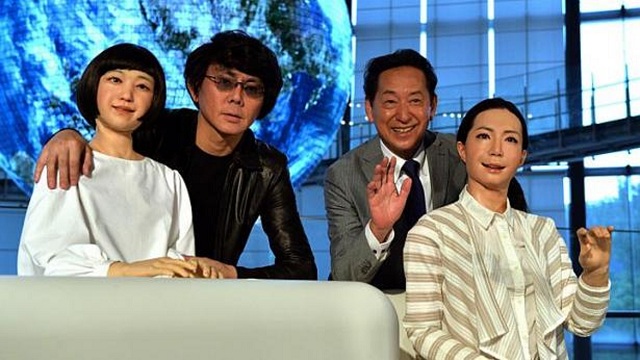 One of the top 100 geniuses alive has done it again. Looks like Greek God Hephaestus has passed on the baton to Prof. Hiroshi Ishiguro in person. Ishiguro, who has earlier experimented by sending his twin android (that costed $1 million) to conduct lectures overseas (who by the way was preferred over the professor himself) and by replacing a mannequin with Geminoid-F at a store just to give the shoppers a glimpse of the future, unveiled his latest works of genius in a Tokyo museum recently.

“Making androids is about exploring what it means to be human, and examining the question of what is emotion, what is awareness, what is thinking?”, said an amused Ishiguro to the reporters as his creations were unanimously well received.

So what do we have here? Made of silicon skin and artificial muscles, Gynoids: Otonaroid and Kodomoroid, and Telenoid: a hairless mannequin head with pointed arms. On their first public appearance, they looked so eerily human and spoke so smoothly that the spectators couldn’t believe they were not real. Surrounded by numerous pairs of curious, almost popping out eyes, seated gracefully on their respective places, the way these gynoids swayed their heads from side to side, waved their hands, twitched their eyebrows, blinked and moved their pink lips in time to a voice-over, had the entire crowd gaping both in disbelief and excitement. Their cuddly companion, baby-like, minimally designed Telenoid, also garnered quite some attention while lap-hopping. 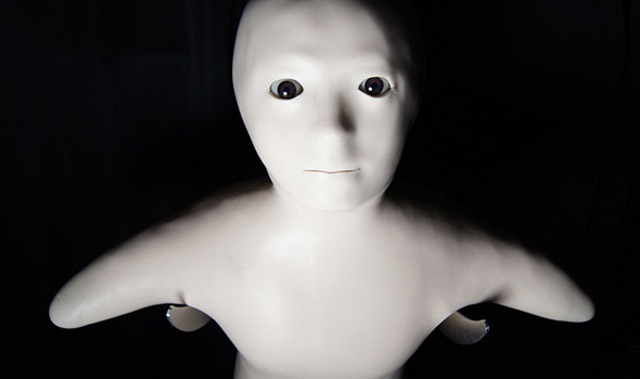 Kodomoroid, the pretty news reader “girl”, glibly recited complex tongue twisting sentences without stumbling even once. It shifted roles by talking in a deep male voice one minute and squeaky girlie voice the next.

As these delicate androids are extremely sensitive to their immediate surroundings, there were some minor issues—for instance, the lips did not move at all while the robot spoke, or the announcer robot Otonaroid remained silent twice when asked to introduce itself. Well, to err is not only human then.

Ishiguro creates robots as playful companions and is still exploring the possibilities of the psychological relationship between humans and robots. “In the future, our lives will be full of robots. Robots are now becoming affordable, no different from owning a laptop,” said Ishiguro.

Does this mean such futuristic innovations, in the near future, will make way for grave unemployment? We would like to know what you think about it, so do share your thoughts with us on this.