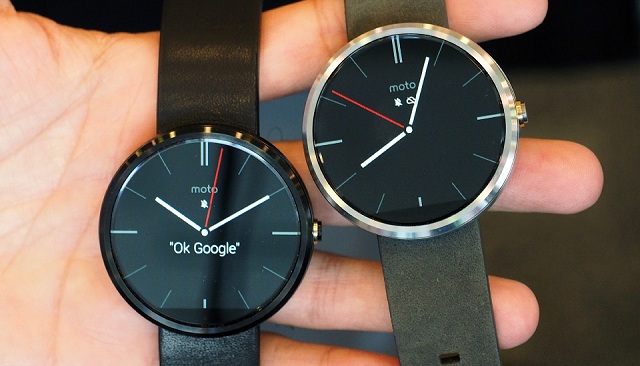 I, personally, prefer classic round dials for my watches. A reason why I was not too thrilled to try out the different Android Wear (wrist) devices which have come out recently. Why? They are drab and square/rectangular. Having said that, one has to admit that they looked futurish, but a bit kiddish too. And, as far as wardrobe aesthetics are concerned, they probably won’t go well with, say, a suit.

That kills it for the fashion conscious modern professional, isn’t it? Well not any more. The unveiling of Moto 360, at Google I/O 2014, has sure made heads turn towards Motorola. And one could sense the designers of Samsung Gear Live and LG’s G Watch (both of which were also unveiled at the Google event), already sweating and itching for their drawing boards to take on this potential game changer, who is threatening to do the unthinkable—bring haute couture to technology!

The Moto 360 looks stunning on the wrist—it’s stainless steel, a welcome change from the black, plasticy monstrosities in the name of Android Wear. The fit and finish seems to be top notch while the chamfered edges of both the glass covering the screen and the metal housing gives it a super luxurious look—more like a Swiss automatic than a smartwatch. The leather strap is the icing on the cake.

Engadget caught Lior Ron, Motorola’s wearable products head, to talk about the watch’s design, which has gone old-school and sexy, as opposed to flashy and, well, not so sexy.  The 360 is Motorola’s way of acknowledging the beauty of wrist watches, sort of like a “nod to the premium watch aesthetic,” said Ron.

The added flair won’t go unnoticed. And the way the glass extend beyond the metal housing, when the trend in mobile screens is for a zero gap between the surface of the glass and the pixels beneath them, has a practical sense too. It shows off the circular display, which is loaded with pixels from edge to edge, to the fullest.

The smartwatch is beautiful. But only the demo version was on display at Google I/O. So details on how it will actually work is not yet available. But the Android Wear arms race is on and it’s going to be a three-way battle.