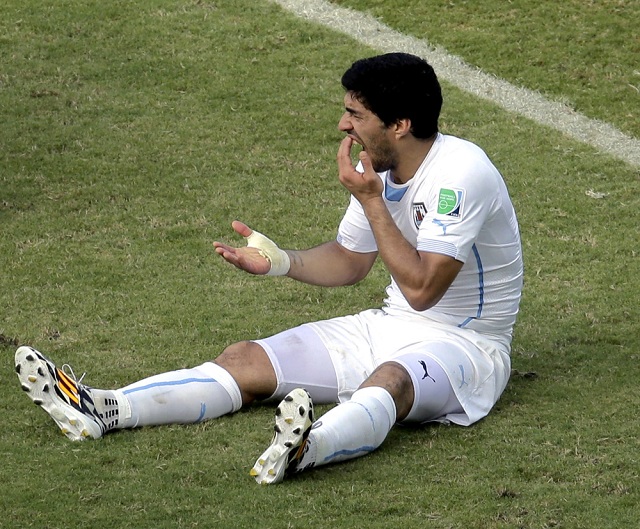 FIFA has charged Uruguay football player Luis Suarez with biting Italy defender Giorgio Chiellini in the World Cup match that took place at Estádio das Dunas, Natal. Uruguay have made it through to the knockout stages with a 1-0 victory over Italy. But the biting incident could lead to a suspension for Uruguay’s best offensive player.

And it took only a few hours for the internet to get flooded with all the funny stuff related to the biting act. Check out all the funniest ones, from Twitter, below.

If Snickers doesn’t reach out & sign Luis Suarez up for one of those “you’re not yourself when you’re hungry” ads, they’re failing — Trevor Hayward (@HeyHayward) June 24, 2014

Luis Suarez could get suspended for biting someone, but his movie career is about to take off. http://t.co/taeB6aYvny pic.twitter.com/aPlDWDKKT8 — SB Nation (@SBNation) June 25, 2014

I guess any part of the body is up for eating.

We have done the translation for you guys: Hi @ luis16suarez, if you fell hungry Come to take a bite at a BigMac

Biting is only okay when you’re made of cinnamon and sugar. #BanSuarez #WorldCup pic.twitter.com/SPsWYih153

If only Suarez had Whataburger before the game he wouldn’t be so hungry.

It was really a promo for Luis Suarez’s new children’s game. pic.twitter.com/w6JJddj5zx

And finally something from Ricky Gervais.

“I thought he was a tree” says Suarez pic.twitter.com/rGgCtzdCev