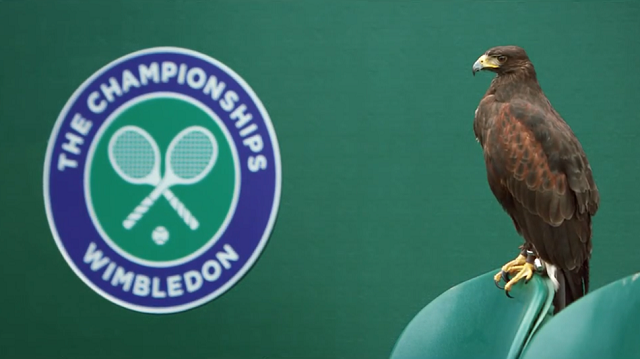 The Wimbledon Championships began yesterday and we are thrilled just as you are about all the action that is coming our way. Among all the many employees at Wimbledon, one guy starts his duty every morning at 5 am and patrols the skies above to scare away any pigeons. He has been doing this for the past fourteen years. Say hello to Rufus the hawk.

But the pigeons are never killed and are just scared away. Kyle Hill, at Nerdist, explains:

Raptors like Rufus—large predatory birds that include eagles, hawks, and falcons—are nothing to mess with. Whether it is scaring pigeons or throwing goats from cliffs, raptors have the speed, vision, and strength to contend with all but the largest game (look at this eagle’s claw for goodness’ sake). All raptors also have ratchet tendons, which allow the birds to effectively lock their claws shut and maintain enormous grip pressures with bone notches and interlocking tendons.

None of that is good news for the pigeons that Rufus keeps out of Wimbledon, but Rufus isn’t a killer. According to a recent Reddit AMA with Rufus’ handler, “Rufus is a non-lethal deterrent which is based on the fact that pigeons have an innate sense of fight or flight, and they don’t hang around very long to fight when they see his talons!”

Back in 2010, India did something similar. They used Langur monkeys to scare off smaller monkeys to prevent trouble at the Commonwealth Games.