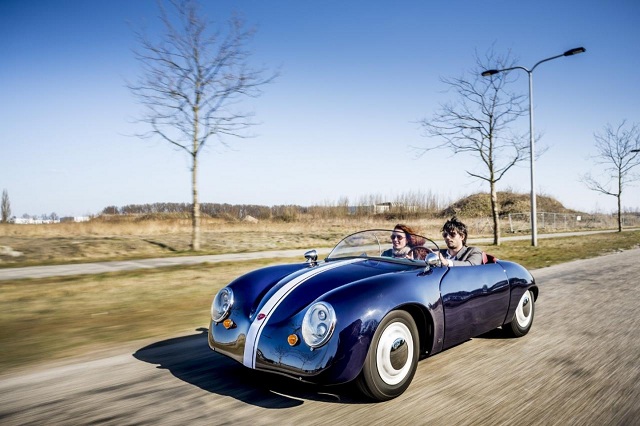 It has an uncanny resemblance to the Porsche 356. It is made of plastic and it is electric. Any guesses? No…. No!!! It is not a Chinese scale model RC toy. In fact, it could be a toy for the big boys provided the big boys in question love driving around in a plastic electric car styled in the classic contours of Porsche.

Not many would have heard of Dutch automaker Carice Cars. Not surprising: They are new in this game of making cars, and they are not German or Japanese.  But, with their limited edition Carice Mk1, the marque from the Netherlands might just be able to grab some attention, especially since it is entering a speciality segment previously occupied by the likes of Spyker, Vencer and Donkervoort. Yes, all Dutch, and all good at making fun vehicles.

The Carice Mk1, the first product of the automaker, is a limited-run electric vehicle that makes a supermodel look heavy. All plastic, it tips the scales at less than 350 kg (771 lb), including the heavy baggage that all electric cars have—the battery pack. The Mk1 will be sold in two versions—15 kW (20 PS) and 40 kW (54 PS). Since it is plastic, they have even planned things for the kids: a Junior Version for 16-year-old drivers with an output of just 4 kW (5.4 PS).

So how has the Dutch managed to incorporate the necessary rigidity while ensuring the car is light? It features a “backbone chassis” with a single thick bar running the entire length of the car through the centre. This spine has the battery pack incorporated in it and it gives the Mk1 an almost 50:50 weight distribution, keeping it stable at higher speeds. But, it is no rocket science that the Carice would be slower than the Porsche it is mirroring, cosmetically that is. But, only 10 of these roofless beauties would roll out every year and that should make the owner of this toy stand out, a hit even, especially with the dames who prefer their man to be a bit eco-friendly.

The starting price is 26,620 euros (including VAT) and bookings will open on June 21. With a bit more spent, the owners can add a small petrol engine to extend the range of the car, especially if he wants to take that environmentally conscious date on a long drive under the moon. And she, hopefully, won’t notice the scent of gasoline or the much sexier grunt of a petrol engine.