Audi has given mostly cosmetic facelift to the premier model in its Sportback range with most of it, including carbon packages—grille and brakes—coming as option. The 2015 Audi RS7 Sportback will have optional matrix LED headlights, like in the A8/S8 facelift and also in the revised A7/S7 Sportback models. The only difference being that the RS7 will have a darker trim.

The tweaks on the body are hard to notice though, with the most eye-catching change being the single-frame honeycomb front grille. It comes with sharper corners and extra choices—with Audi offering glossy black, matte aluminum and carbon packages as options. A couple of more changes are visible outside, including slightly altered air inlets on the front bumper. There are fresh paint options too—Sepang Blue, Mythos Black, Glacier White and Floret. 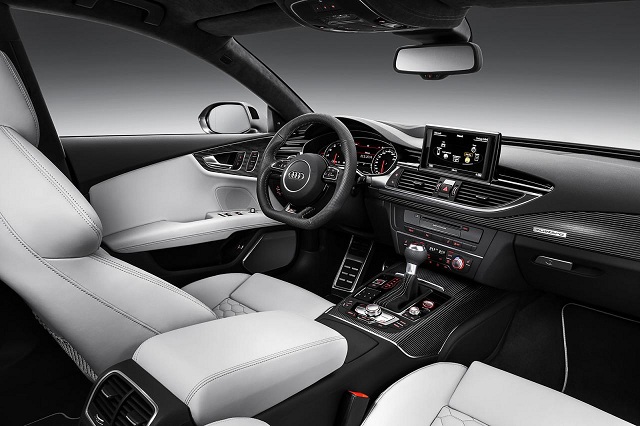 Inside there are small changes on the instrument panel. The RS7 will come with updated shift paddles and MMI infotainment system. The air outlet controls have undergone a bit of tweaking too. The RS7 facelift model will ride on 20-inch forged alloy wheels, with Audi providing 21-inch set in three color finishes as option. The car can also be configured with carbon fiber ceramic disc brakes, but it comes at an additional cost.