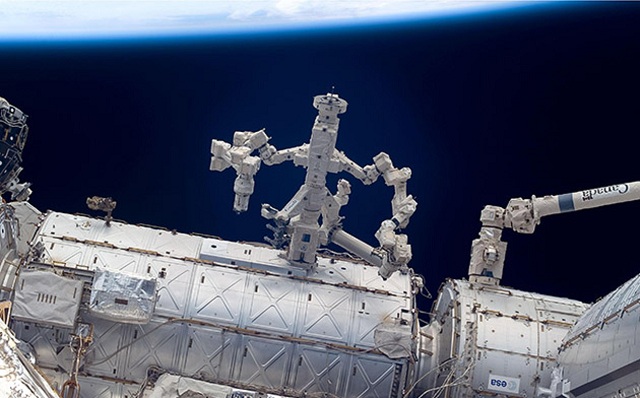 When technology advances tasks become easier for humans. At the moment, our astronauts on board the ISS are getting help from a robot which is trying to fix itself so that the astronauts don’t have to put on their suits and float around in space.

The Canadian robotic arm of the ISS, called Canadarm2, is equipped with a multi-limbed helper robot called Dextre. The helper robot is used by Canadarm2 to fix things that are broken on the ISS or to catch unmanned vehicles that are headed for the space station like the Dragon capsule from SpaceX.

But at the moment Canadarm2 is trying to fix itself with help from Dextre and it is attempting it with minimum of human input. Dextre is being controlled remotely by Canada’s Space Agency to move and replace Canadarm2’s old cameras. It is expected that the robot will finish the task on Thursday.

It reportedly is the first time that such a task, which usually requires a spacewalk, is being done by using a robot. Spacewalks, as you might know, takes time and is always complex, and there are health risks as well. So utilizing robots to perform tasks is ideal, and the astronauts will also get more time to conduct experiments. But certainly it will take some time before robots start doing all the repair jobs on board the ISS.

Check out the video and leave your thoughts in the comments below.