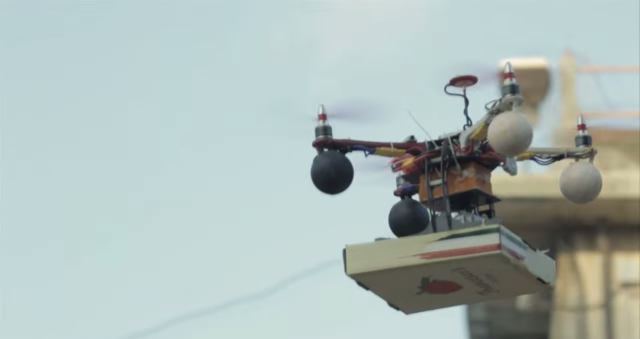 Mumbai, in India, is the fifth most populous city in the world and it is also famous for its traffic snarls. So it makes perfect sense that a pizza outlet in the city is thinking about utilizing drones to make deliveries for them instead of a two-wheeler. And they have successfully conducted a test flight.

The outlet’s chief executive Mikhel Rajani says, “All of us had read about Amazon’s plans of using drones. We successfully carried out a test-delivery by sending a pizza to a customer located 1.5 km away from our outlet”. The idea certainly saves time and money, but there are restrictions. At the moment, the authorities won’t allow the drone to fly above 400 feet and over security establishments. The drone also has a limited operating radius of 8 km, after which charging will be required.

But don’t expect a drone to be knocking on your doors anytime soon. This was just a test flight and it might be used routinely only after a few years.

Reportedly, it is the first time that a drone has been used for delivering pizza in India. But it’s certainly not the first time in the world. Last year, Domino’s Pizza in the UK was in the news after it used a drone, the “DomiCopter“, for pizza delivery.