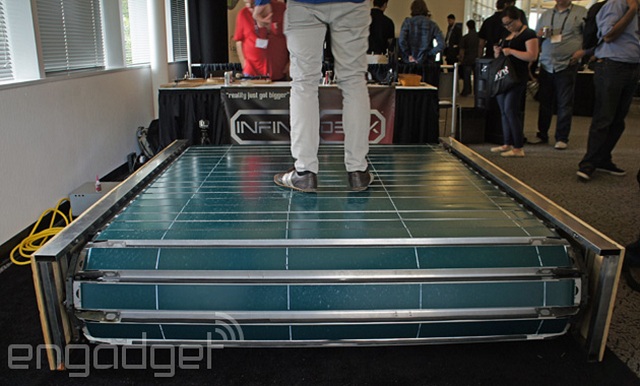 This should be the product for those of you out there who do not get on the treadmill just because you find staring at a wall (or whatever is in front of you) while walking for 15 minutes absolutely boring. The Infinadeck will allow you to take a look at everything around you and you won’t have to turn your head.

Infinadeck, which has been spotted at the Silicon Valley Virtual Reality Expo, is an omni-directional treadmill which will allow you to stroll in any direction. Each of Infinadeck’s treads is covered in a moving belt which is used together to allow walking in any direction.

But it is a prototype at the moment and an active operator is required to change directions. And apparently, it is very loud too. Its makers have plans to automate the direction changes by adding motion sensors, but that will require more funding.

Check out the video below to see Infinadeck in action.

CBS is reportedly interested in the Infinadeck. The treadmill could end up being used by them as a prop for shooting on green-screen sets. And imagine coupling Infinadeck with the Oculus Rift to play games such as Call of Duty. Pure awesomeness! And how about using the treadmill for training athletes who play Rugby or other games which require players to change direction suddenly while running.