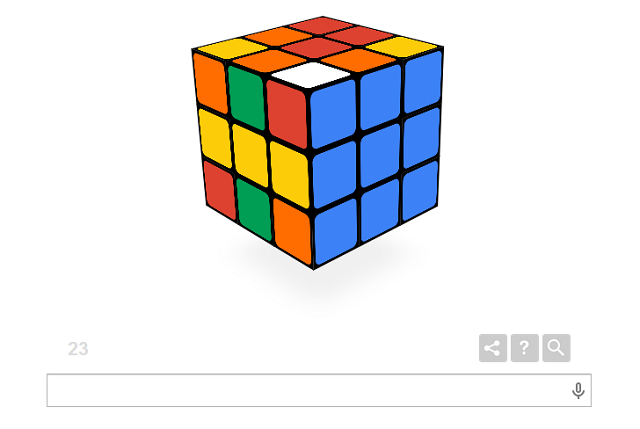 It’s the 40th birthday of the Rubik’s Cube and Google is celebrating the occasion with an interactive doodle that allows you to play the puzzle online.

The Rubik’s Cube was invented by Hungarian architect Erno Rubik in 1974. It was created as a working model to explain three-dimensional geometry. He hand-carved the ‘cubelets’ to create the first cube and tried to solve the puzzle himself but it took him a month to be successful.

Each face of a Rubik’s Cube has nine stickered squares and you will be able to manipulate each row and column independently around a central pivot. So you can move the squares to different positions on the toy. You will win if you can manage to return it to its original configuration, just one color on each face (red, blue, white, green, yellow or orange).

It is easy, you feel? You should know that there are over 43 quintillion permutations of the cube. Yes, that many unique distributions of the 54 squares. But it is solvable in just 20 moves; ‘speedcubers’ can solve it in speeds as fast as six seconds.

But even if you are a pro, it might take a bit of time to get used to the doodle. The animated cube wasn’t moving the way we wanted when we tried our hands at it. Yet, we managed to do one face, as you can see above.

The Rubik’s Cube was licensed to the Ideal Toy Corp back in 1980 and so far has sold over 350,000 units. So, it is the biggest selling toy of all time.