It’s a bird! It’s a motorbike! It’s a bicycle! Well, it’s a foldable electric bike designed by an ingenious trio from New York. Conceptualized, designed and created by Agustin Agustinoy, Eric Sevillia and Lucas Toledo, the bike, christened the Gi-Bike, is meant to create simple, portable, and inexpensive public transport for big cities.

Of course, there are many foldable and electric bikes in the market now, but only a few have been designed with aesthetics and practicality in mind. This electric beauty seems to marry both in a sexy 37-pound package. However, the Gi-Bike is not exactly an electric bike either. It just has a pedal assist system, powered by a battery pack, which gives electrical assistance during those huge climbs. It is feature-packed too—a one-second folding time, carbon belt drive, and a 40-mile riding range (battery) without recharging to name a few. 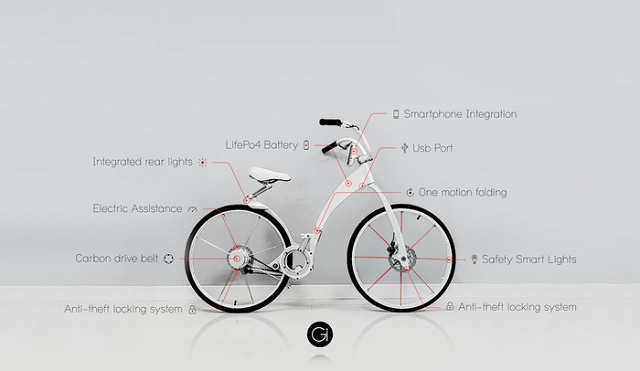 The bike also has an in-built GPS tracking system that can also be used to lock it when it leaves a designated area. The inbuilt powerful battery of the bike can also be used to charge the cellphone while on the go. But guys, just make sure you don’t use the mobile while riding.

It was Toledo who came up with the idea for the Gi-Bike, when he was living in Córdoba, Argentina, and happened to suffer during a public transit strike. He wanted a means to free himself and others from being slaves to the stretched and congested public transit systems in place in major cities.

The makers of Gi-Bike are using Kickstarter to raise funds (a target of $400,000) to start mass producing the bikes. The first bikes will cost $2,995 on Kickstarter, but ultimately, we will have to shell out $3,390 when they begin shipping.

One has to say that the bike looks cool. Do you think so too and would you love to ride one? Then visit Kickstarter and see if you want to become part of what the designers call as the “bike of the future”.