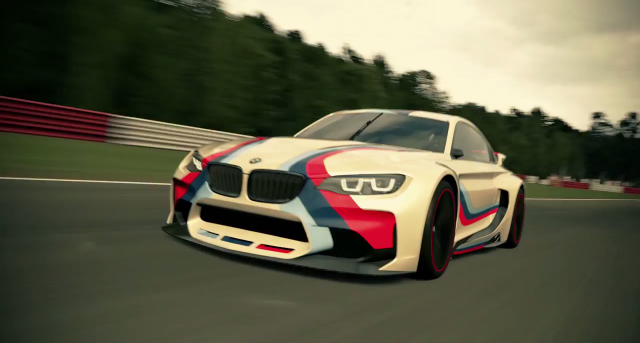 BMW has unveiled their latest baby, one exclusively made for the virtual world (the real world rather for hardcore gamers and Gran Turismo fans). Some of the features of the Vision Gran Turismo, a model created by the BMW Group’s design team for PlayStation 3’s Gran Turismo 6 video game, could actually end up in the real world. The BMW M2, rumored to be launched next year (in the real world), could borrow some of the bodywork from its virtual cousin.

The video released by BMW gives us an idea on what inspired the German company’s design team. The Vision owes its good looks from the real world—the track-only M235i Racing, though there are huge modifications, the most visible one being the front and rear spoilers to aid downforce.

Everything in the Vision Gran Turismo, though virtual, is performance based—starting with the carbon fiber air conduction elements that reduce drag as well as keep the car’s weight to just 1,180 kg (2,601 lbs). Now, that’s light, virtual or real! And to add to its balance, the weight is distributed in a 50:50 front-rear ratio.

The car is a gas-guzzler, clearly the virtual model is not that environmentally friendly. But, power is what we want in GT6 and power is what we get if we end up driving this beauty, provided by an inline-six 3.0-liter M TwinPower Turbo engine. The output, transferred to the rear axle through a six-speed sequential gearbox featuring steering wheel-mounted paddles, is staggering: 549 PS (404 kW) between 6,200 rpm and 7,300 rpm and a peak torque of 680 Nm (501 lb-ft), which is achieved at just 1,900 rpm.