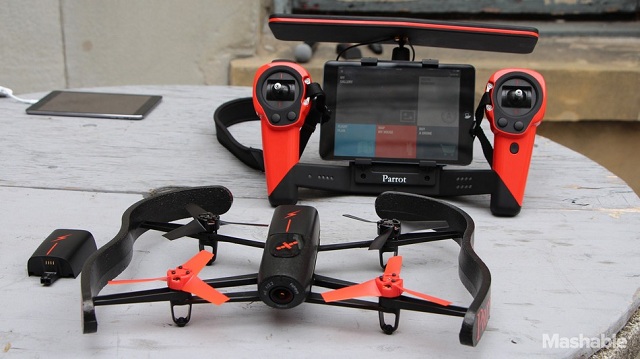 Parrot is taking drone pilots to where no pilots have gone before. Being made compatible with Oculus Rift, Parrot’s new drone, Bebop, will give the controller a flying sensation, enhanced by the image stabilized HD video from its 14-megapixel fisheye camera. And the user can control the drone and camera—the pitch, tilt and pan functions—by just changing the direction he or she looks through the Oculus Rift, which is connected to a Skycontroller through HDMI. Coolness!

For those who like to stay in control using their mobiles or tablets, iOS and Android apps could be used to control the Bebop as well as view the recorded video in real time. The drone also works with an optional Skycontroller, which has four additional antennas to increase its Wi-Fi range to 2 km (1.2 miles). Now, that’s quite a reach.

The drone—the most advanced brought out by Parrot so far—is designed to fly both indoors and outdoors without creating a trail of fallen objects in its wake, thanks to removable bumpers and a system that auto-stops whenever the blade strikes something. The blade platform measures 28 x 32 x 3.6 cm, and is quite light, tipping the scale a little below the 1 pound mark.

The awesomeness of Bebop notwithstanding, it does have its Achilles heel—the airtime. A 1200mAh Lithium-ion battery (2.5 hours for a full charge) provides just 12 minutes of airtime. So, that 2-kilometer range might not be all that useful unless you have your SUV handy to rush behind your drone in case it runs out of fuel. However, the system utilizes a standardized port that can be used to hotswap your existing battery packs.

The Bebop’s strength is the quality of its video. Parrot has focused on video quality and stability, and has packed the drone with all sort of sensors including an accelerometer, a gyroscope and a magnetometer. Bebop also comes with a system that utilizes built-in GPS which enables the drone to hover at a place when the pilot takes his hands off the controller.

The drone and the Skycontroller will be available on the market by the end of the year. The price has been kept a closely guarded secret by Parrot. But it requires no rocket science (or drone science in this case) to figure out that the new toy would be priced substantially higher than the company’s original A.R. Drone, which is sold at $300.