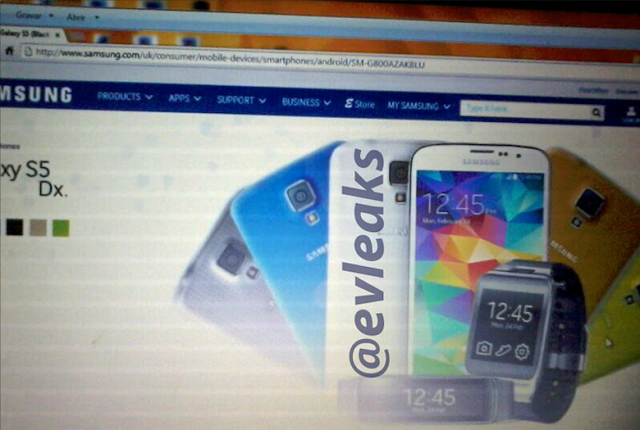 We have been seeing and hearing a lot about the mini version of Samsung’s Galaxy S5, the Galaxy S5 Mini. So, we are expecting the handset to be showed off officially sometime in the near future. But, there’s always time for more leaks. The leaked image above is said to be that of Samsung UK’s website and what we are looking at could be the S5 Mini.

As you can see, the URL in the image shows the model number “SM-G800”, which has been associated with the Galaxy S5 Mini. The handset seems to have many similarities in design with the S5 (of course, it’s the S5 Mini); you can see the heart rate monitor, the perforated back, and the version of TouchWiz. And the S5 Mini, which could end up being called as the “Galaxy S5 Dx”, might be available in multiple colors, including green, blue, yellow, gray, black, white, and gold. But don’t forget that what you see above could also be fake.

We tried going to that URL, but it’s not possible at the moment. But we will keep digging and let you guys know as soon as we get more info on the handset. So, stay tuned for updates.

As for what all things we know so far, the Galaxy S5 Mini is expected to boast a 4.5 inch Super AMOLED display, Android 4.4.2 KitKat, a Snapdragon processor (quad-core), an 8MP rear camera, 2MP front cam, 1.5GB of RAM, 16GB of inbuilt storage, and a 2100mAh battery.

Are you waiting for the Galaxy S5 Mini? Share your thoughts in the comments below.