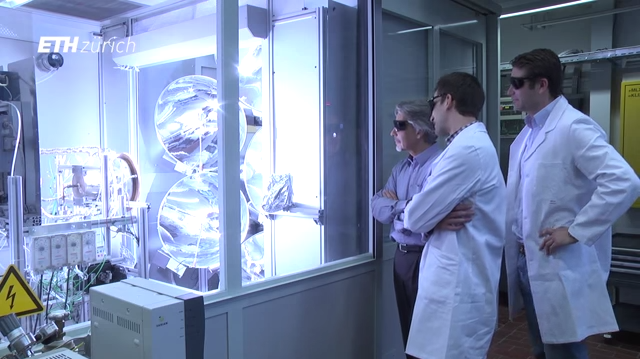 A hydrocarbon fuel that is also “green”! Now that bit of news is interesting and should catch your attention for the right reasons.

Scientists in Europe have devised a technology to use solar energy and produce Syngas—a mixture of hydrogen and carbon monoxide. The researchers, part of a project funded by the European Union, believe that Syngas could be used as a “green” jet fuel. If industrial scale production of Syngas by using solar power is made possible then this could solve quite a lot of our energy issues, besides easing global warming as the process uses up one of the greenhouses gases (carbon dioxide).

Here is how it works.

The raw materials required are readily available—carbon dioxide and hydrogen. The energy source will be the sun, but, in the laboratory process, researchers simulated concentrated sunlight at 700 degrees Celsius to convert water and carbon dioxide into syngas, which was then turned into kerosene (liquid) and could be used to power buses and other means of transport.

The Chemistry World quoted Maire Geoghegan-Quinn, European commissioner for Research, Innovation and Science, as saying that the technology could increase energy security.

“This technology means we might one day produce cleaner and plentiful fuel for planes, cars and other forms of transport,” added Geoghegan-Quinn. “This could turn one of the main greenhouse gases responsible for global warming into a useful resource.”

The researchers managed to produce just a small glass jar of kerosene in the lab as of now. But the results hold a lot of promise. The estimate is that a full-scale solar reactor could potentially produce around 20,000 liters of jet fuel per day. Yes, you read it right. 20k liters is no mean amount and similar solar reactors could one day find the answer to the energy demands of our developing world in a very eco-friendly and efficient way. The infant technology has to go a long way to reach there though.