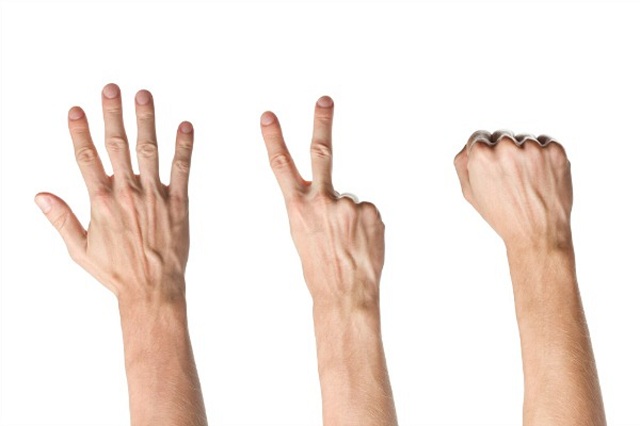 Though people tend to associate the rock-paper-scissors game with kids—branding it a juvenile time pass—there is more to it than the simple act of out-thinking your rival. It is a valuable tool in the hands of psychologists, who use the game to analyze decision-making abilities of the participants in a competitive environment. It is proven to be a useful tool in the hands of corporate trainers too.
But still you just can’t help but wonder how serious can this game could actually be, right? Well, very serious, especially when the competition is rather personal, where players look at various means to try to get into the minds of their opponents and predict their next move—be it rock, paper or scissors.
Don’t worry you pros out there, there is help at hand now and that too “made in China”. Zhejiang University’s researchers have used classical game theory and analyzed the winning/losing moves of 360 volunteers during a rock-paper-scissors tournament to unearth some interesting patterns.
We all know that classical game theory explains how players make random choices. By sheer maths, there is equal probability of a player selecting one of the three options, as explained through the Nash Equilibrium concept. Yes, the concept developed by one Mr. John Forbes Nash Jr., the protagonist in the 2001 movie, A Beautiful Mind. Yup, Russell Crowe!
The Chinese study observed that the players followed the Nash equilibrium prediction, but beyond that, another pattern emerged, understanding which will provide you the key to victory in the game. It is based on the “win-star lose-shift” strategy where a player who has lost trying a particular action tend to shift while the winner repeats his victory actions or moves (if a player wins with paper he is likely to repeat the action during the course of the tournament more than a few times while if someone has lost with paper he will invariably shift in the order of the game, so he will go with scissors in the next round). If you closely observe a player for a couple of rounds, the pattern can be easily identified.
This pattern is born out of a natural conditioning of the human brain which makes most of us stick to a tried and tested winning formula.
The research now is limited to just rock-paper-scissors and there is no guarantee that the “win-star lose-shift’ pattern is valid for other games. So next time you are in a competition to determine the champion of champions in rock-paper-scissors, try looking at the blokes around. You may end up figuring out the winning formula with your beautiful mind!
Source