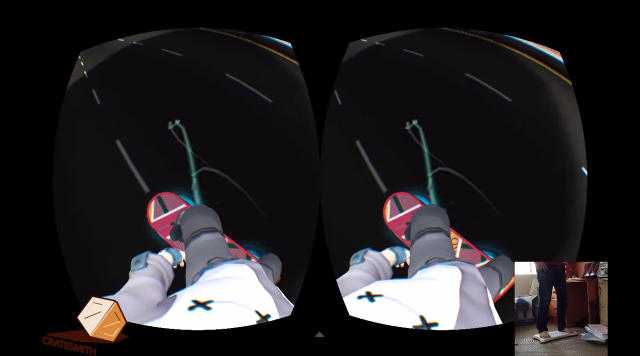 The future is here, at least in virtual reality! For many like me, who grew up fantasizing time travel after watching the ‘Back To The Future’ (BTTF) flicks, had our own must have props. The hoverboard, which Marty McFly uses in Back To the Future II, topped the list for me.

Back to reality now! Though replica hoverboards, which can actually float an inch or two are available now, they can hardly take the weight of a kid, forget a 200-plus pounder like me. But things are not as bleak as it used to be for us wannabe hoverboard junkies.

Behold the Oculus Rift, the Wii, and their holy union. Yes, someone actually hoverboarded his way around a virtual city block. Check out the video below and let’s hail the pioneer, who happens to be developer Kieran Lord, more popular on Twitter as Cratesmith. He used the Wii Balance Board, Oculus Rift, and some clever, secret (as of now) coding, to fly in virtual space!

Lord explained the thrill in a comment on Reddit. “The way I’m imagining the hoverboard physics is slightly different to the BTTF maglev skateboard. It’s more a snowboard with a ‘virtual slope’ of the front/back angle of the board. If that works and feels good the player could just get up a ton of speed and then stomp their back foot to get the same effect as going over a jump ramp.”