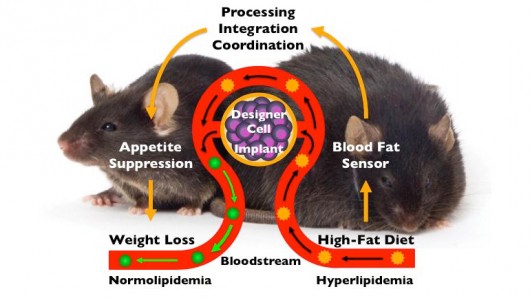 It’s hard to lose weight. They say that you need the right combination of diet and exercise not only to lose the weight, but to keep it off, but sometimes, even hard work and determination aren’t enough. Science can help.

ETH-Zurich biotechnologists have apparently created some sort of genetic circuit that could “trick” your body into thinking that you’re full. The idea behind this genetic helper is that it is able to monitor the fat levels in your body. If your fat levels get excessively high, this synthetic genetic circuit will release a hormone that makes your body feel satiated. If you feel full, you’re less likely to eat.

In this way, your sense of “hunger” isn’t so much directly related to how much you’ve eaten in the past few hours, but it is also tied into how much fat is circulating around in your body. The genetic helper can be implanted in a capsule and it contains modified human cells with special genes, proteins and reaction steps.

Initial testing has been conducted on lab mice who were fed a high fat diet. After they got all obese, the scientists implanted the designer capsule into the mice and watched as they stopped eating excessively. And thus, they also started losing weight. When the blood-fat level got normal again, the regular appetite of the mice returned as usual. Mice who got the capsule but were fed a regular diet (5% fat) did not reduce their eating habits.

Of course, fatty foods are only one part of the equation. If you load up on carbs, you’re probably going to get and stay fat too. And if you don’t exercise, that’s not good for you either. All that said, this “designer cell” could be an interesting way for humans to win the battle of the bulge some time in the future.