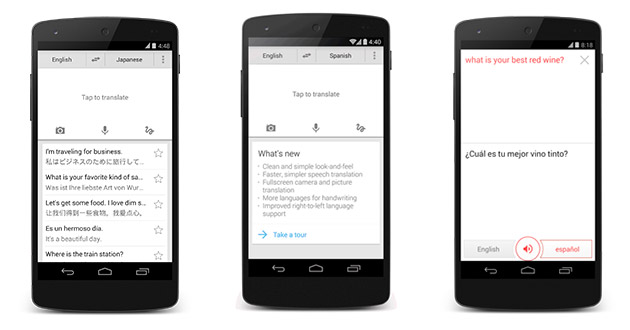 I envy polyglots. I’ve always wanted to have the ability to converse in many languages, but I’ve never been any good at learning other languages. Thankfully, just like so many other areas of my life, technology is here to help me be more productive, more useful and more communicative.

The Android app for Google Translate has now been updated to be prettier, easier to use and more robust. The new user interface is a lot cleaner and more straightforward compared to the old design, so you’ll be able to jump right into those translations without the extra fluff. You can hit the mic button and start talking; then Google Translate will work its magic and show you what you just said in German, Spanish or whatever else.

Another new feature is that you can switch between the languages by tilting your device, as you can see in the animated GIF above.

The handwriting recognition has also been expanded to now include support for Greek, Javanese, Hebrew and even Esperanto. If you use the in-app camera to look at a body of text in Ukrainian or Malay, it can translate that too. And yes, as always, it’s a free download via the Google Play Store, so hop to it. Merci beaucoup, Google.