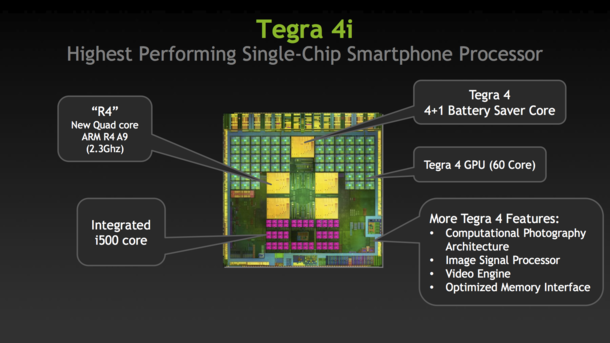 This should come as little surprise, as it only makes sense for companies to keep producing updated chips and products. You’ll already find plenty of gadgets on the market today with the Tegra 4 system-on-a-chip from NVIDIA, but the new Tegra 4i and Tegra 5 chips should be ready some time next year.

Looking down the timeline, the official announcement and revealing of details for the Tegra 4i SoC (codenamed “Grey”) and Tegra 5 SoC (codenamed “Logan”) is set for the first quarter of 2014. Their actual deployment in real smartphones, tablets and other similar devices should start happening no later than the second quarter of next year. The chipsets have already been certified by AT&T.

NVIDIA Tegra 4i is really a more budget-oriented version of the Tegra 4, except it has an LTE-Advanced modem. Since you get fewer GPU cores and an updated quad-core Cortex-A9 CPU, power efficiency should be improved.

With the Tegra 5, you don’t get an integrated LTE support. It will work fine with the Icera i500 LTE modem though. The Tegra 5 will boast the 192-core GPU Kepler for stunning performance.