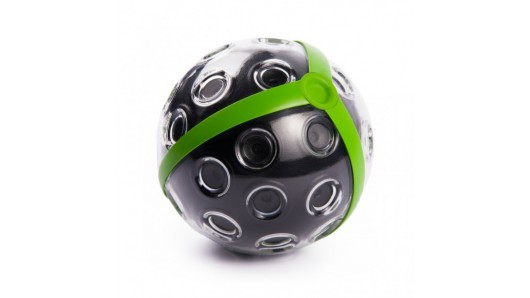 Most smartphones these days come with a built-in panorama feature where you can effectively stitch together multiple images to make this one extra wide scene. You might have also used the photosphere feature in some Android phones to stitch together a sphere of photos, not unlike what we get in Google Maps Street View. What if you could do the latter in a much simpler and far more tossy kind of way.

Enter Panono. The company is offering a ball camera that you literally throw in order to take pictures with its 36 tiny lenses. All of that then get stitched together to produce a 72-megapixel photosphere. The spherical scene is far more immersive than any single panorama could even create, even if it was 360 degrees.

The current iteration of the Panono ball camera measures around 4.33-inches in diameter and weighs 0.66 pounds. Understandably, the ball camera is built to withstand a few drops, but it’s probably best if you catch it instead. They’re also saying that it is water-resistant, in case you toss it in the pond.

The photos are taken from the 36 fixed focus lenses when the accelerometer detects it is at the apex of the throwing arc. This provides a 360 degree view from the highest possible point and it’s likely the steadiest point in the throw. The designers do say that you should avoid spinning the ball in the air, as too much rotation will cause the cameras not to fire. Alternatively, you can just mount it on a pole.

This is just a prototype at the moment and the developers are seeking $900k on Indiegogo to complete the project. If it does get funded, the retail version will be about $549.