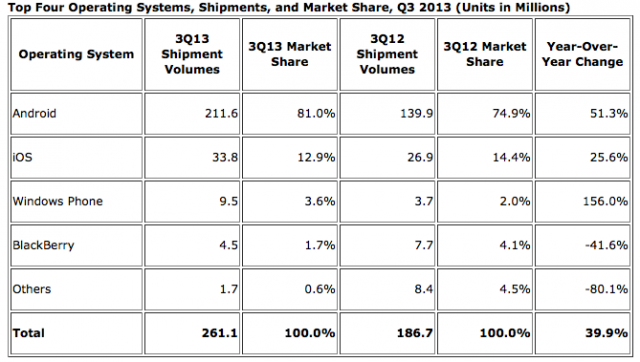 It’s no secret that Google Android is increasing in popularity and this appears to be largely at the expense of Apple. Even so, it doesn’t look like Tim Cook and the team in Cupertino have very much to worry about. Even though iOS market share dropped about 1.5% compared to last year, shipment volumes actually increased about 25%.

The latest stats have just been released by the IDC and they’re looking at the shipment volumes and market share for the third quarter of 2013 compared to the same period in 2012. While the iOS market share fell from 14.4% to 12.9%, shipment volumes increased from 26.9 million to 33.8 million units. That’s because the market as a whole has grown substantially.

To put that in perspective, Android shipments surged from 139.9 million units in 3Q12 to a whopping 211.6 million in 3Q13. That’s a year-over-year change of 51.3%, generating a third quarter 2013 market share of 81.0%. One of the even more profound stories is the rise of Windows Phone, which experienced a 156% gain in shipment volumes year-over-year, but that’s still only 9.5 million units in 3Q13. 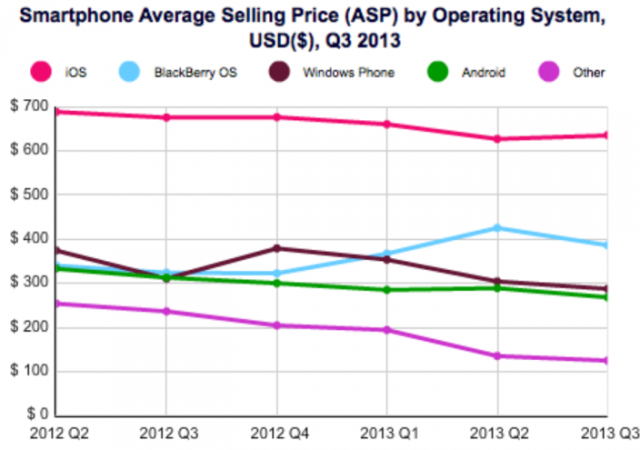 Perhaps one of the biggest reasons why Apple isn’t feeling too bad about losing 1.5% of the market is that the average selling price of an iPhone ($635)is substantially higher than the average Android smartphone ($268). Apple doesn’t compete at the lower end of the market, whereas a large proportion of the Android market is geared toward entry-level devices, which bolsters the overall shipment numbers.