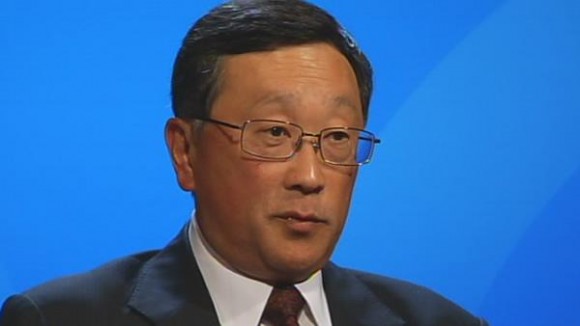 Today was a very big day for the boys and girls in Waterloo with both good and bad news coming down the pipe. First, CEO Thorsten Heins is stepping down from the head honcho role. John S. Chen will be stepping into the role on an interim basis while the company figures out what’s going to happen. He’s also going to be taking over as Executive Chair, replacing Barbara Stymiest. That’s the first big tidbit.

Second, you might remember how Fairfax Financial was supposed to buy BlackBerry for $4.7 billion. That’s not happening anymore. The full takeover has been taken off the table, but Fairfax and a group of other investors are prepared to invest $1 billion in BlackBerry while it continues to navigate the increasingly competitive waters of smartphones and tablets.

We’re not sure what this all means for BlackBerry, but John Chen was very quick to say that he has no plans to shut down the company’s handset division. He most recently helped to resurrect Sybase and he hopes to bring the same kind of revitalizing energy to BlackBerry. The company is still up for grabs, possibly by Lenovo if you believe some of the rumors, so we’ll just have to keep our ears to the ground.

As it stands, the future doesn’t look all that bright. As of this writing, BlackBerry stock is down over 16% on the day to $6.49 per share.