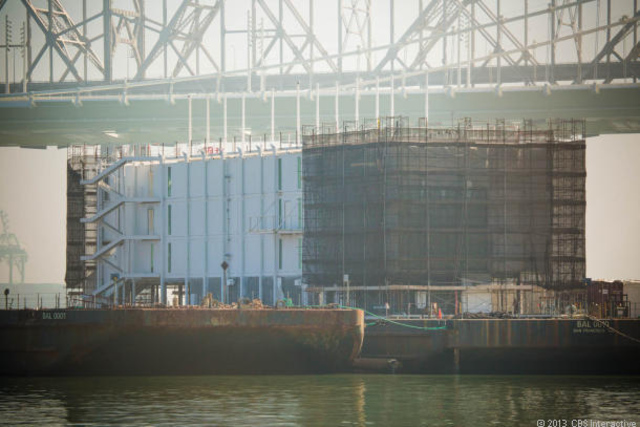 Do you know what’s the problem with investing millions of dollars into building a retail space in any given city? Once you’ve selected your location, you’re pretty much stuck with it. Google is thinking outside of the box again by going into the box. Or several boxes, in the form of shipping containers on a barge, floating around in San Francisco Bay.

The secret Google barge was once rumored to be a data center, but now it looks like Google is building a special retail space that will be by invitation only. It is being constructed out of shipping containers, so they can quickly disassemble and reassemble the retail space virtually anywhere in the world. It’s stacked four high with the lower three levels containing “dazzling” showrooms and then the top deck will be a “luxurious” party deck.

The Treasure Island Google Secret Base will be used to showcase products from the company’s Google X division, like Google Glass. It all seems pretty wild, but construction has hit a bit of an obstacle. Because it’s a floating vessel, the Google barge is applicable to all federal maritime regulations. Assuming they can get past that, we could have a pretty unique concept on our hands. It could be used for future product unveils too.

Check out the CBS video below for more coverage. “OK Barge. How far away is Tony Stark?”