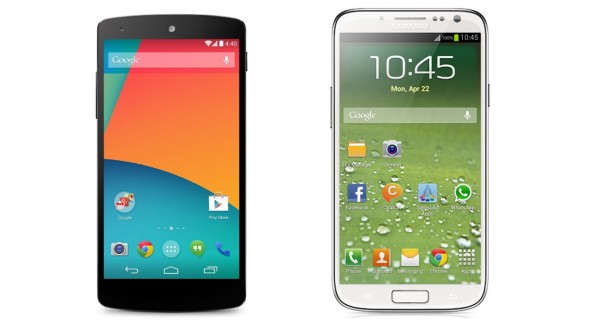 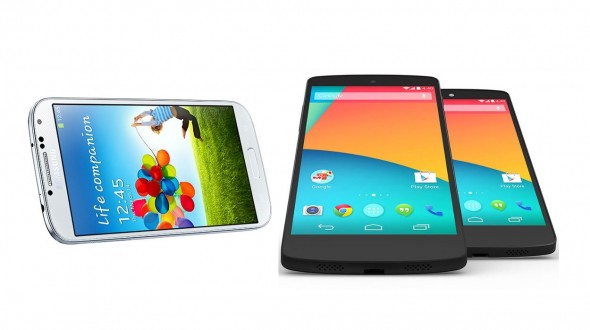 Let’s be fair. The Samsung Galaxy S4 has been out on the market for several months already and the Google Nexus 5 has only been out for a day. If they’re both flagship-caliber devices, it would make sense that the Nexus 5 would be more powerful and more compelling, but is that really the case? Let’s break it down.

Performance: As far as raw processing power, the Nexus 5 has the leg up. It gets a 2.3GHz quad-core Snapdragon 800 chip, compared to the admittedly speedy 1.9GHz processor in the SGS4. The Nexus 5 has the edge in graphics too with its Adreno 330 GPU, offering twice the performance of the Adreno 320 in the S4. Both phones get 2GB fof RAM.
Winner: Nexus 5

Storage: The internal capacity of the two phones is the same. You can choose between 16GB and 32GB flavors, but the Galaxy S4 has the advantage of a microSD expansion slot for up to 64GB more.
Winner: Galaxy S4

Display: Both phones have a 1080p display, but the Nexus 5 is marginally smaller at 4.95-inches. That gives it a slightly better pixel density and people say the IPS panel on it is the best available. Some people might prefer the more saturated look of the S4 displays. And so, this is really a matter of personal preference.
Winner: Tie

Camera: We were hoping for a 13MP shooter in the Nexus 5, but LG and Google went with the 8MP unit presumably for cost savings. The optical image stabilization is a major plus too. The S4 has a 13MP camera, plus a variety of modes like Drama Shot for added fun.
Winner: Galaxy S4

Size and Weight: Both phones weigh in at right around 130 grams with practically the same footprint too. The S4 is marginally thinner, but that may or may not be advantage depending on the ergonomics of the phone. In the end, the difference is neglible.
Winner: Tie

Software: If you’re a fan of Samsung’s TouchWiz UI and all the jazz that comes along with it, then you’re going to like S4. Some of it can feel like bloat, but some of it can be useful too. On the other hand, there’s something special about vanilla Android, especially when you know you have the newest version first (Android 4.4 KitKat) and you’ll be first in line for updates.
Winner: Nexus 5

Price: I don’t think we really need to get into this. The outright price for the Nexus 5 is about half that of the SGS4. Carrier subsidies could balance things out, but the $349 outright starting price cannot be ignored.
Winner: Nexus 5

Tallying up the score, we have three points for the Nexus 5, two points for the Galaxy S4 and two ties. Of course, some of these points may be more important than others to you. If 8 megapixels will do and you don’t need a microSD slot, then the Nexus 5 is the obvious choice. If you want a higher megapixel count with more camera modes, and you don’t care much for KitKat anyway, then the S4 might still be good.

Then again, the Galaxy S5 is rumored to launch in only a few more months. But, by then, we might already be thinking about the Nexus 6 (or whatever it’s called). The grass is always greener just beyond the horizon, isn’t it?