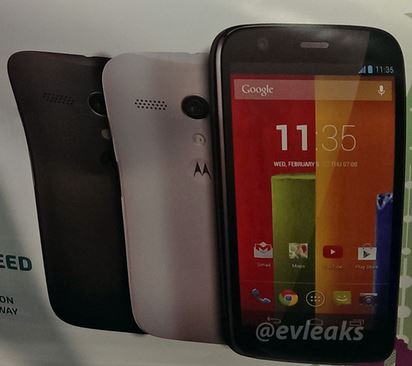 In some respects, the rumored Moto G from Motorola is going to be everything we thought the Moto X was going to be: cheap, but reasonably innovative. The specs for the Moto G have now been leaked and it is indeed pointing toward being a mid-tier if not even entry-level device.

It’ll have the same 4.7-inch 720p resolution display as its Moto X counterpart, but there is a quad-core 1.5GHz Qualcomm Snapdragon S4 Pro processor in there, along with 8GB/16GB of storage, an 8MP camera, and an LG-made 1950mAh battery. The overall design is similar to the Moto X too.

In order to be viable as an option, it’ll have to be cheaper than the Moto X, which currently sells for $99.99 with a two-year contract. Given that, it makes sense that the “tip” is saying the Motorola Moto G will be free on contract. If that is indeed the case, then the outright price would hopefully be in the same range as the Nexus 5, but that could be wishful thinking too.