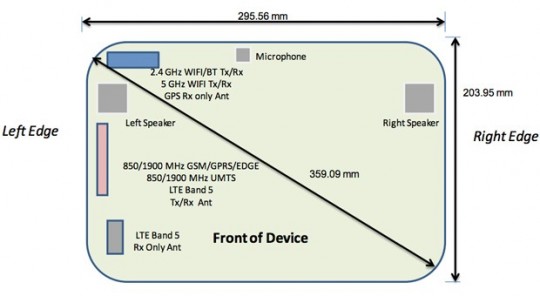 As if Samsung didn’t already dabble in enough screen sizes already, a new FCC filing has popped up for the Samsung SM-P905. According to these documents, the Samsung tablet will have a total diagonal size of 14.1 inches. When you factor in the bezel, that would translate to a screen size of about 12.2-inches.

This would be in addition to the tablets that the company already sells with 7-inch, 8-inch and 10.1-inch displays, not to mention the bevy of screen sizes available for its smartphone and phablet ranges. The diagrams in the FCC filing also depict a stylus slot, which would lead us to believe that this going to be a part of the Galaxy Note range.

The so-called Galaxy Note 12.2 was also spotted in an AnTuTu benchmark as the SM-P905. The benchmark listed the specs as a Qualcom Snapdragon 800 processor, 3GB of RAM, 32GB of internal storage, and a screen resolution of 1600 x 2560 pixels. That would be roughly in line with the newest Galaxy Note 10.1.

Is there a big enough market for an even bigger tablet? Or would you be more likely to pick up an Ultrabook instead at that point?