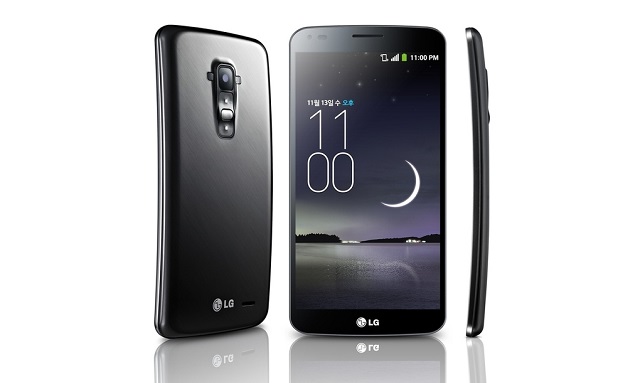 Samsung already has its curvy phone out there, so it only makes sense that its Korean brethren do the same. After much rumor milling, the LG G Flex smartphone has been officially revealed to the world and it is one curvaceous beast.

Unlike the Galaxy Round that curves left to right, the LG G Flex has its curve going from top to bottom, similar to what we had previously experienced with the Nexus S and Galaxy Nexus, but far more dramatic. This time around, we get a 6-inch flexible OLED display with a 720p resolution. It’s powered by a 2.26GHz quad-core Snapdragon 800 processor from Qualcomm, 2GB of RAM, a 13MP camera and a 3500mAh battery. It measures between 7.9mm and 8.7mm thin.

There don’t appear to be any UI tweaks or other special features that take advantage of the curved shape here. Instead, LG is saying that this the world’s first “real” curved smartphone and it offers better phone call ergonomics, a better video experience, and a more precise display. And then there’s the self-healing thing.

Borrowing a page directly out of Logan’s book, the Korean press release makes direct mention of Wolverine from X-Men, saying that the G Flex has the same kind of healing capabilities. What they really mean is that you can remove scratches from the protective film on the back of the phone. It still won’t survive a gunshot or don’t get me started on Magneto. Expect the LG G Flex to launch in Korea in November with the international release coming some unannounced time afterward.