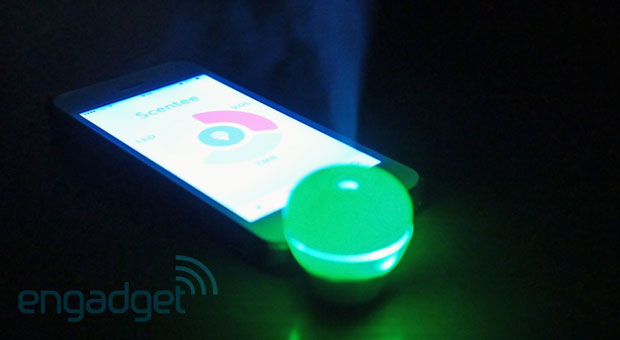 When you get a Facebook update, text message or whatever else on your smartphone, you probably get a notification. For most people, this could be an audible alert like a beep. Maybe you have your phone set to vibrate, so it buzzes. And many phones have a notification light too, but there’s one sense that has been ignored in all of this: smell.

What we have here is Scentee, the solution to a problem that no one had. When your buddy sends you a message over BBM, the Scentee will spritz out a burst of fragrance. The guys at Engadget are thinking bacon, but I’ll leave the smell up to your imagination.

The Scentee itself is a small accessory that will plug into the headphone jack on your iPhone or Android. When the companion app receives a notification, the Scentee lights up and spurts out a smell. You can choose from rose, mint, cinnamon roll, coffee, curry, lavender, apple, strawberry or even corn syrup. And yes, bacon made the list too. There’s also a limited edition version with baked potato.

It makes zero sense, even if it makes all sorts of scents. The accessory, made by a company called Shift, has been in development since 2010 and it will launch via Amazon Japan on November 15. Each capsule lasts for 100 bursts with extra capsules selling for $5.