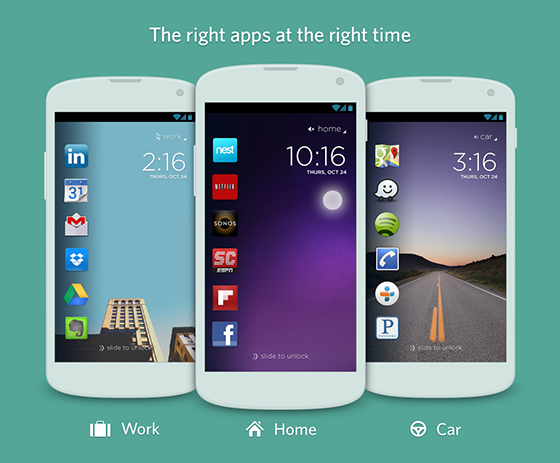 For years, smartphone makers have recognized that we use our devices both for work and for play, but the way we use them under these contexts is different. We’ve seen phones with “work” and “home” modes, trying to provide this kind of separation, but a new development called “Cover” looks like it could be a heck of a lot better.

Developed by engineers who once worked for Yahoo, Google and Facebook, Cover effectively replaces your default home screen. It then adapts to contextual information, recognizing your location and the time of day to provide you with the most relevant home screen. When it detects you’re in the car and driving, for example, maps and directions become front and center. When you’re at the office, your home screen might get dominated by Gmail, LinkedIn and Evernote. And then when you’re back home, it switches off to Facebook, Netflix and Sonos.

While I’m sure that you can customize some of these features yourself, the key is that that Cover learns your behavior over time. This way, after a few days of use, it’ll know that you use XYZ apps during the day at the office, but ABC apps in the evenings at home. The most used apps are then displayed at the top of the vertical list. Cover goes further by allowing you to “peek” into apps in a BB10 kind of way, plus a unique app-switching function for added utility.

On my Motorola RAZR HD, I have something called SmartActions that takes on a similar kind of function. If it’s between certain hours at night, the phone is connected to a charger, and the phone isn’t moving, then it’ll change the ringer to silent. I can also have location-based triggers. Cover takes that idea, goes further, and opens it up to every other Android user, providing them with “the right apps at the right time.”

Cover is still under development and there’s still room for improvement. They have to address security concerns, for example. In the meantime, you can go to coverscreen.com to get on the wait list.