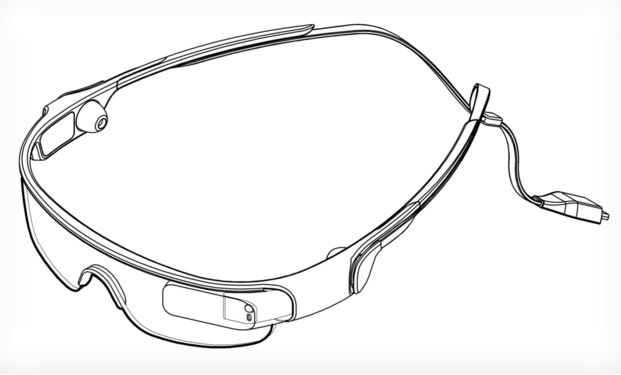 For the foreseeable future, it looks like wearable electronics are going to be the “in” thing to do. We’re already seeing a lot of attention surrounding smartwatches, but with the commercial launch of Google Glass right around the corner, all the other tech companies will surely be making some headsets of their own. And Samsung is one such company.

Samsung has reportedly filed a design patent with Korean authorities for a type of “sports glasses,” but these are “smart” sports glasses that could tackle Google Glass head on. According to the memo attached to the design drawings, this design will have integrated earphones, so users can “take phone calls and listen to music during workouts.”

It goes beyond being a simple stereo Bluetooth headset, though, because the Samsung sport glasses patent also calls for a display for showing alerts from the connected smartphone to the user, presumably for text messages, music playlist, and the like. The lens is “either transparent or translucent.”

Since this Samsung version seems to have more of a focus on sports than Google Glass, it’s possible that they are also working to make it a little more rugged. It’ll need to be reasonably waterproof to fend off your sweat, for example. This is just a drawing, of course, so we could be quite a ways off before Samsung has a physical product to show us.