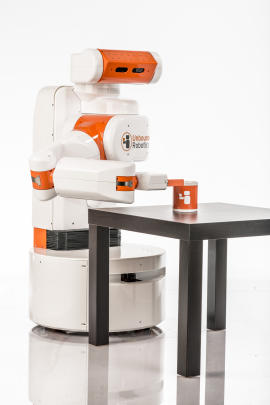 Would you like to have your own personal robot servant to handle the mundane tasks in your life? That dream will soon be a much more affordable reality.

The first product coming out of a Santa Clara, California-based company called Unbounded Robotics is the appropriately named UBR-1. It’s fundamentally based on the PR2 robot from three years ago… which makes a lot of sense since Unbounded Robotics was founded by ex-employees of Willow Garage, the company responsible for the PR2. The biggest difference is that the UBR-1 is a fraction of the price of the PR2.

Whereas the PR2 originally launched at a hefty $400,000, the UBR-1 will be made available for a mere $35,000. They were able to save on a lot of the costs for several reasons. Instead of using more expensive sensors, for example, they are utilizing commodity sensors. The 3D camera on the PR2 was about $5,000. By contrast, the UBR-1 effectively uses the $150 Kinect instead. Another point of note is that the UBR-1 only has one arm instead of the PR2’s two arms.

That one arm can do a lot though. The arm can perform seven different motions and there is a modular gripper at the end. That gripper can be replaced with other attachments, like a suction cup, if third parties want to develop the modular parts. Unbounded Robotics could do it too, based on market response. It’ll also have mount locations on its head and base where additional attachments and sensors can be added.

Yes, the UBR-1 can only do mundane things like stock shelves and fetch a cup of tea, but that’s still pretty sweet for “only” 35 grand. We’re getting closer to having Rosie from the Jetsons, yes we are.