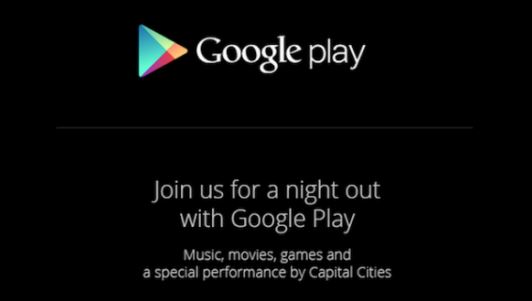 So, the current rumors are telling us that Google will be officially unveiling the Nexus 5 and Android 4.4 KitKat on October 28, but that may or may not be the case anymore. Google is sending out some special invitations to a special event on October 24 in New York City and, as cryptic as it sounds, they say it’s going to be a “night out with Google Play.”

This lends itself to a discussion of new things happening with the Google Play Store, but it may or may not have anything to do with the new flagship smartphone and the latest build of their Android platform. The invitation goes on to talk about music, movies and games, so it could be an expansion of what was once Google TV and will soon be Android TV, plus other entertainment-related announcements. There’s also a “special performance” by Capital Cities.

It wouldn’t make a heck of a lot of sense for Google to host this event on the 24th, only to follow up with another event on the 28th, so it’s very well possible that a “night out with Google Play” would also involve the “surprise” reveal of the Google Nexus 5 and Android 4.4 KitKat. Or it might not. Google is being as secretive as ever, even if the Nexus 5 has already leaked all over the place.