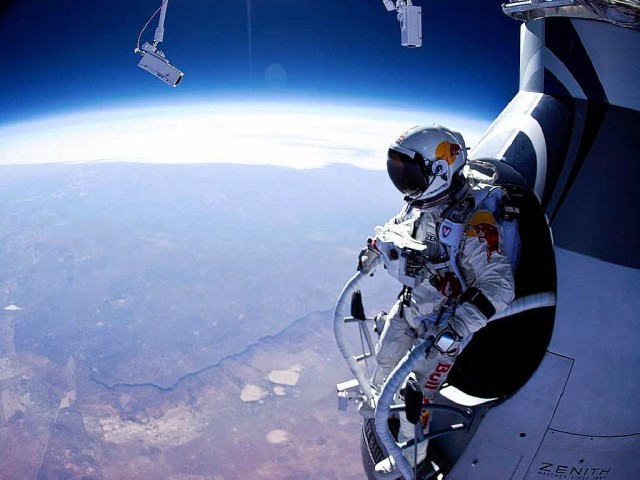 Do not watch the video posted below if you can’t even handle 40mph on your bike. It shows Austrian daredevil Felix Baumgartner plummeting to Earth at 833.9 mph (140mph faster than speed of sound). Yes, that’s really, really fast.

From a starting point 24 miles above the Earth’s surface, Baumgartner leaped from space. As you might know, that event happened last year, greatly inspiring all of us down on Earth. A YouTube video of Baumgartner’s great jump went viral soon after and it has more than 35 million views so far. But certainly many would have found it difficult to be in Baumgartner’s shoes even through a computer screen.

And now, Red Bull, which sponsored Baumgartner’s dive, has released a new video of the freefall celebrating its one-year anniversary. The video has been shot from our daredevil’s point of view, and it should give you some idea about what it was like for Baumgartner.

Check out the video and try to keep calm while going through the spinning and the heavy breathing and the terror. And don’t forget to leave your thoughts in the comments below. Would you take a leap like Baumgartner if you are given a chance?