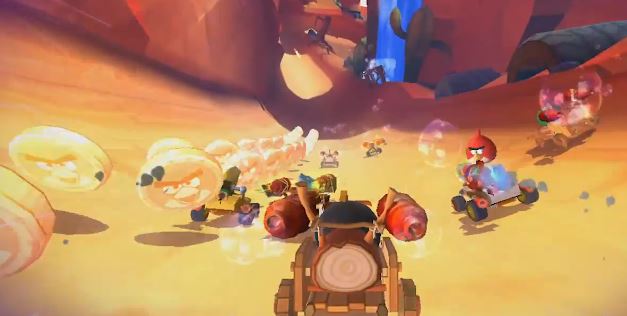 We were offered a teaser video some time back, but now Rovio has put forward an official trailer for its upcoming racing game. It’s obvious enough that Angry Birds Go! borrows a lot of inspiration from Mario Kart (including some of the more recent airborne and cart customization options), but this game almost reminds me more of Diddy Kong Racing. I can’t really put my finger on why. Of course, the controls will have to be smartphone and tablet friendly, so I’m anticipating some tilt based controls.

The other notable difference is that I don’t think there’s going to be a gas pedal. That’s because Angry Birds Go! will feature downhill races (only?), allowing gravity to propel your karts down the colorful track. The full cast of birds and pigs will be in tow, each with their special moves. You can collect coins too, which leads me to believe that Rovio could be going “freemium” here instead of just straight up free.

The trailer doesn’t say it specifically, but it’s a safe assumption that Angry Birds Go! will race its way to iOS and Android platforms.