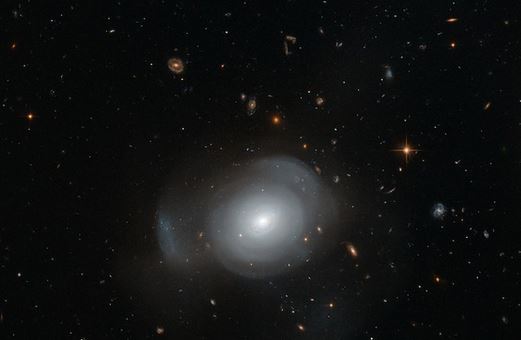 No, it’s not the most imaginative or creative of names, but the galaxy dubbed PGC 6240 could be one of the most interesting. It has “hazy petal-like shells” that form a “pale rose in the sky.” What makes PGC 6240 (located in the southern constellation of Hydrus) of particular interest are the globular clusters of stars around it. Some of these contain old stars and others contain younger stars. This is very uncommon.

The European Space Agency posits that this is the result of two galaxies colliding. “Such a merger would send ripples through the galaxy and disrupt its structure. [This] would ignite a strong burst of star formation in the galaxy, which would then trigger similar activity in nearby space — leading to the creation of new, younger globular clusters around PGC 6240.”

The resulting “cosmic bloom” can be seen in the video below. This was put together by the ESA, NASA and the Hubble Space Telescope.