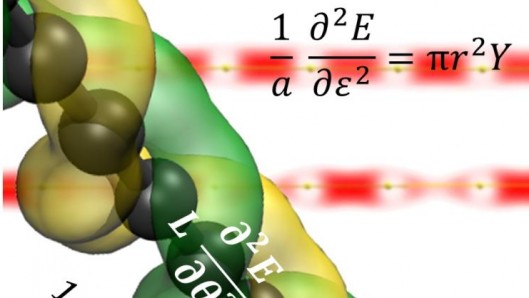 In the ongoing search for the world’s strongest materials, Rice University reseachers may have found the discovery of the century in what is being called carbyne. It’s a monodimensional chain of carbon atoms that is reportedly twice as strong as the already very strong carbon nanotubes and it has three times the stiffness of a diamond. Interesting enough, all of these are made from carbon.

When you re-arrange carbon atoms into a new formations, you get what are known as allotropes of carbon. That’s what carbyne is, along with graphite and diamonds, plus artificial forms like carbon nanotubes, graphene and buckyballs. Each time, scientists thought they had discovered an even stronger allotrope of carbon, but carbyne–linear acetylenic carbon–could really be the strongest one yet.

The structure of carbyne is such that you get alternating single and triple atomic bonds along a single, linear chain. This means that it is quite literally one atom thick and it is a one-dimensional string. Contrast this to a 2D graphene sheet or a 3D carbon nanotube. As you can imagine, going to one dimension could open up a whole new world of possibilities for a broad range of applications.

That’s the good news. The bad news is that carbyne has only been demonstrated in computer simulation, but they have shown that it should be stable at room temperature. What’s more, when you twist carbyne by 90 degrees, you get a magnetic semiconductor. More study is clearly warranted, as until they demonstrate the viability of carbyne in the real world, we’re just looking at red and green orbs on a computer screen.