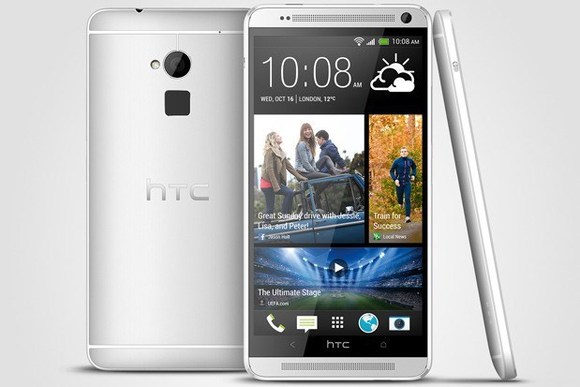 Even though worldwide sales haven’t really reflected this, the HTC One is widely regarded as one of the best Android smartphones on the market today. HTC is expanding on its One lineup with the introduction of the even larger HTC One Max, a phablet featuring a 5.9-inch 1080p HD display. You want big? This is pretty freaking big.

Aside from the bigger display, the overall aesthetic for the HTC One Max remains largely unchanged from its smaller but older cousin, still boasting the front-facing speakers. You also still get the 4MP rear-facing UltraPixel camera, front-facing 2.1MP camera, quad-core Qualcomm 1.7GHz processor, and 2GB of RAM. Other features include a 3300mAh battery, microSD slot, and your choice of 16GB or 32GB of storage.

Perhaps borrowing some inspiration from the iPhone 5S, the HTC One Max comes with a fingerprint scanner, presumably for unlocking and security purposes. It’s not integrated into a home button, however, being placed on the back of the device instead.

No word on carrier partners, but you can expect the HTC One Max to hit worldwide retail channels some time this month.