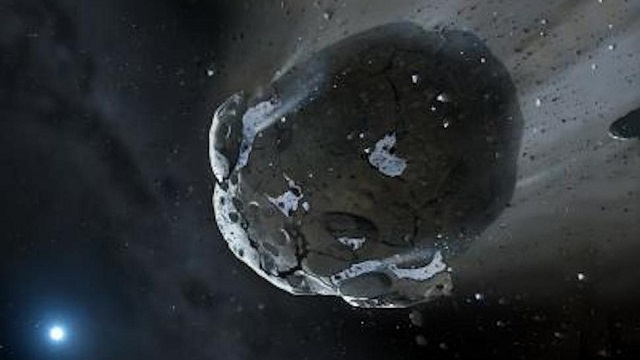 We have heard before about exoplanets which could be covered by water, but scientists appear to have found evidence of a water-rich Earth-like planet outside the solar system. This seems to be a first.

According to the scientists, it is “the first evidence of a water-rich rocky planetary body” outside the solar system. They are talking about the “shattered remains” of a planet 170 light years away. Yes, there’s no planet there now. The remains are that of a tiny planet which was composed of 26 percent water.

The star that the planet was orbiting, called GD 61, started to die around 200 million years ago. GD 61 eventually consumed the planet and any other bodies in its system before turning into a white dwarf. But, we know that there was a water-covered planet there earlier. How, you ask?

Professor Boris Gänsicke of the Department of Physics at the University of Warwick explains:

“At this stage in its existence, all that remains of this rocky body is simply dust and debris that has been pulled into the orbit of its dying parent star. However this planetary graveyard swirling around the embers of its parent star is a rich source of information about its former life. In these remnants lie chemical clues which point towards a previous existence as a water-rich terrestrial body”.

So, there you have it, a water rich rocky (rocky – that’s why it’s Earth-like) exoplanet.

So if you needed proof that water exists outside of our solar system, this could be it. And you should know that, according to researchers, there are 100 billion Earth-like planets in our galaxy alone. That’s certainly a lot! In December 2012, they spotted Tau Ceti which is 12 light years away and could be habitable. After a few months, two other planets were discovered. And we can expect more and more discoveries as time goes by.