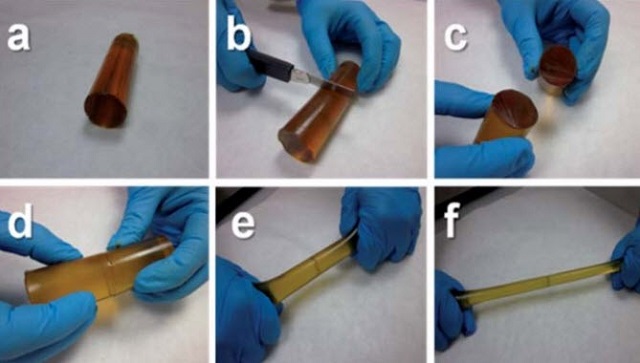 A new polymer created by Ibon Odriozola and colleagues at the CIDETEC Centre for Electrochemical Technologies can heal itself at room temperature, without the application of external catalysts.

As you might already know, “cross-links” (chemical bonds that glue polymer chains together) help polymers to stick together. But normally, these bonds will only be formed when there’s a source of energy like light, pressure or a change in pH. But that’s not the case with the new self-healing polymer. The new polymer, a soft poly(urea-urethane) network, takes advantage of metathesis reaction in aromatic disulphides. The reaction can naturally create covalent bonds at room temperature. So the self-healing polymer can heal by itself and there’s no need for an external energy source.

As you will see in the video below, the scientists tested the material by cutting it into two pieces. The two halves were then put together and left at room temperature for two hours. Afterwards they were unable to separate the two pieces manually. They found out that the material is able to heal itself with 97 percent efficiency.

We might be able to use the polymer as an industrial adhesive. It may also be used in place of similar compounds in cars, houses and electrical components for improving fault tolerance. At the moment, the material is soft. The scientists are planning to make a harder version of the polymer that could be used for making plastic parts which show strong resistance to cutting and continues straining, among other uses.

Check out the video below and share your thoughts about the self-healing material in the comments below.