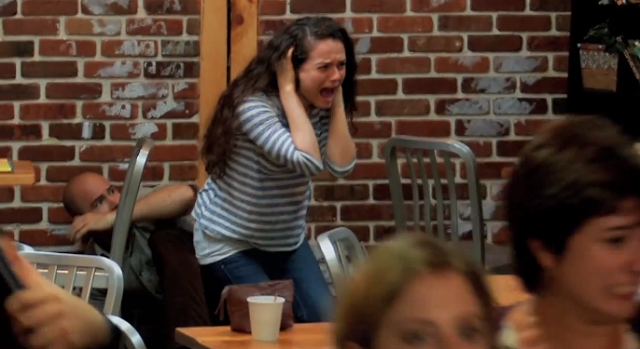 You might have heard that the remake of the movie Carrie has been scheduled to hit theatres on the 18th of this month. What we have for you here is a publicity stunt for the upcoming movie. It’s an awesome prank which involves a girl with telekinetic powers freaking out in a coffee shop – terrifying the patrons in the process.

In the prank, the girl starts using her telekinetic powers after getting angry with a stranger who knocks over her drink. Both the girl and the stranger are, of course, actors and there are others who are sitting in the cafe who are also in on the act.

Fake walls, hidden pulleys, tables which can be controlled remotely, and spring-loaded book shelves are all being used in the prank, and the effect created by these things is pretty awesome, and you can see that in the faces of the unsuspecting customers in the cafe.

Check out the video below and make sure you watch the full video as things get better and better.

And, OK, we went a bit too far when we said Chuck Norris would be scared by this prank. Chuck Norris is awesome and probably even Carrie White won’t be able to do what Mr. Norris does in the video below.

What do you think of the “Carrie” prank above, are you excited for the upcoming remake?