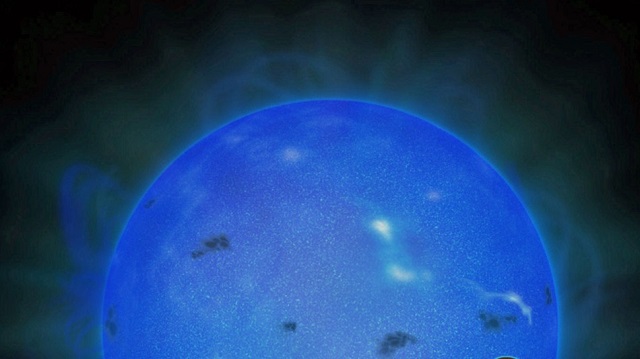 A super-Earth named Gliese 1214 b is six times the size of our planet. The exoplanet is said to have a water-rich atmosphere, but what’s more interesting about it is that its atmosphere has a strange “plasma form” of water – due to the planet’s high temperature and density.

According to principle investigator Norio Narita of the National Astronomical Observatory of Japan, “As the temperature and pressure are so high, water is not in a usual form (vapor, liquid, or solid), but in an ionic or plasma form at the bottom the atmosphere — namely the interior — of Gliese 1214 b“.

First discovered by the MEarth Project, which tracks low-mass stars in order to search for planets, and confirmed by the European Space Agency’s High Accuracy Radial velocity Planet Searcher in Chile, Gliese 1214 b is about 40 light-years away from our solar system and it is 70 times closer to its star than Earth is to the sun. This results in the planet’s temperature reaching up to 540 degrees Fahrenheit.

Narita says, “At high pressure and high temperature, the behavior of water is quite different from that on the Earth. At the bottom of the water-rich atmosphere of Gliese 1214 b, water should be a super-critical fluid“.

“We predict that ionic or plasma water can be seen deep inside the planet. However, we may not be able to find hot ‘ice’ — high pressure-ices — inside of Gliese 1214 b“, adds Narita.

But though there is the presence of water, life probably won’t exist on the Gliese 1214 b because of its close orbit. According to Narita, “Although water vapor can exist in the atmosphere, liquid water — namely oceans — would not exist on the surface of this planet. So unfortunately, we do not think this planet would be habitable“.

Hit the source link to know more about super-Earth Gliese 1214 b. And don’t forget to share your thoughts about the exoplanet in the comments below.