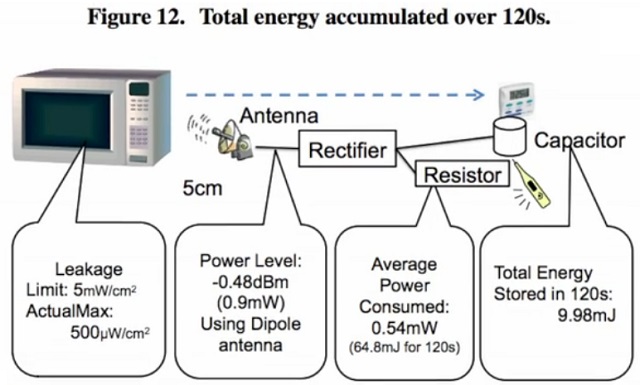 Pizza Rolls and reheated leftovers, that’s all a microwave is good for, right? Not necessarily. What if we told you that your microwave could be used to charge your devices? Crazy, we know. When a microwave runs, it loses energy. That wasted energy could be harvested and the researchers from the University of Tokyo are looking into ways for doing exactly that.

Engineer Yoshihiro Kawahara and his team have come out with a machine that captures the wasted energy from the microwave. They have designed a harvester with an antenna that picks up energy, and an electric current is generated for charging your device. Kawahara came up with the idea for the energy harvesting after learning about a NASA project, which is still in development, for capturing the sun’s wasted energy. NASA plans to send solar farms to the earth’s orbit for harvesting the sun’s energy which would be transmitted to earth as radio waves.

According to the U.S. Food and Drug Administration, the amount of energy that leaks from a microwave should be “far below the level known to harm people”. So for getting a significant amount of charge, you will have to run your microwave for quite some time (sorry, your cellphone still requires its charger). On the other hand, Kawahara was able to power (though only for a few minutes) kitchen devices, like a timer having small batteries, via the energy released by running a microwave for two minutes.

Either way, this is a pretty cool experiment. What do you think?