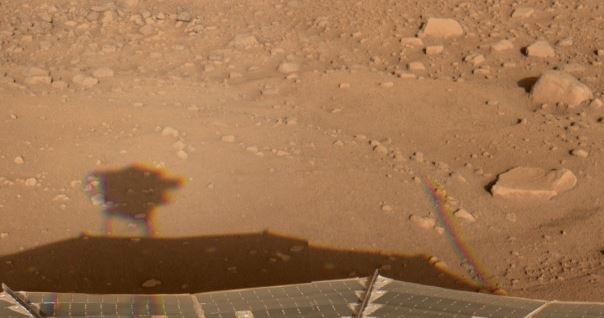 A big part of the problem with a proposed manned mission to Mars is that the Red Planet looks like a barren desert with no available water in sight. And, well, people need water to survive. While it has been known that some frozen water can be found in the polar ice caps, a soil sample extracted by the Curiosity Rover has discovered that water could be much closer at hand.

The discovery started when Curiosity brushed up some dust on the Martian surface, but they quickly learned that this didn’t really allow for deep analysis. So, the next step was to rove on over to the Gale Crater where scientists believe there may have once been some water. Curiosity then drilled a hole about 2.5-inches deep, scooping up that sample of dirt.

The Sample Analysis at Mars (SAM) device then proceeded to analyze this soil sample a little bit at a time, taking a look at pieces about the size of a baby aspirin. The sample is then heated to 835 degrees Celsius and the resulting gases indicate what’s in the soil. Long story short, the analysis revealed that the Martian soil is about 2% water. That’s not much, but it means it’s there and it can be extracted and you don’t have to dig that deep to get it. A cubic foot of soil should yield two pints of condensation. Not bad.

Of course, further study and analysis is needed. They do believe that this soil sample is representative of the greater Martian surface, though, thanks to the mixing and distribution that happens with the dust storms. They also found evidence of perchlorate in the soil, which could hamper the production of thyroid hormones, so that’s something they’ll need to manage too. And, you know, getting to Mars and keeping alive and all that too.