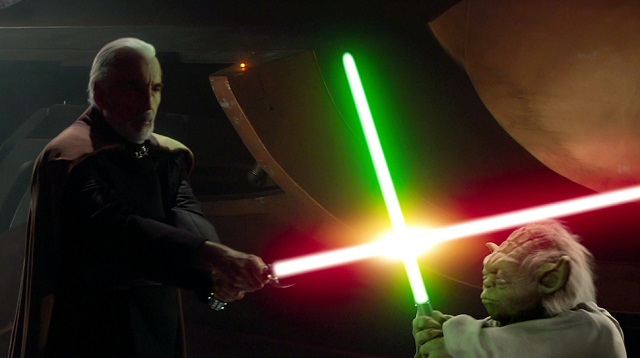 We have seen many things from science fiction movies becoming a reality after technological advancements, and light sabers could soon be added to that list. If you are a Star Wars fan, you should be glad to know that a team of physicists have created a new form of matter which apparently behaves like a lightsaber. The physicists managed to get photons attached to each other, and a molecule was formed. This molecule is different from any other matter.

According to Lukin, “It’s not an in-apt analogy to compare this to lightsabers. When these photons interact with each other, they’re pushing against and deflect each other. The physics of what’s happening in these molecules is similar to what we see in the movies“.

So what’s causing the formation of the molecule? It’s something called the Rydberg blockade. According to the rule, if an atom is excited by a photon it’s not possible to excite its neighboring atoms to the same degree. But when we blast multiple photons through a cloud of atoms, a push-pull force is created between them which results in the formation of the molecule.

So, does this mean that we are going to see a cool new weapon in the near future? No. The physicists are not going to start work for developing a lightsaber. They are thinking that the new matter will help them build efficient quantum computers, actually. Still, this is pretty cool, nonetheless.