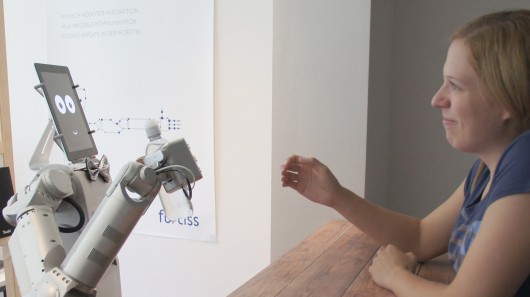 People are being replaced by machines just about everywhere. Many groceries have self-checkout lanes, for example, that effectively eliminate the need for human cashiers. What if the same thing could happen at the local pub, replacing the human bartender with a machine equivalent?

What you see here is JAMES, the Joint Action in Multimodal Embodied Systems robot, and he wants to serve you a drink when you approach him at the bar. Funded by the EU, the James project involves such scientists and engineers as Dr. Jan de Ruiter from Germany’s Bielefeld University, along with partners from Crete, Munich and Edinburgh. What makes James unique is that he can read your body language to determine whether or not you’d like to order a drink.

When people were asked about how they signal to a (human) bartender that they’d like to order something, they say that they wave or hold up money. However, when the researchers captured video in an actual bar, that wasn’t the case at all. People simply leaned in, perpendicular to the bar, and made eye contact with the barkeep. If they didn’t want to order, they typically faced away from the bar or chatted with the person next to them. So, that’s how they’re approaching the solution with James.

He’s got a tablet for a face, he’s conversational, and he’s got a single arm to serve drinks. Based on the video below, I suppose the system works, but it does seem awfully slow, cumbersome and awkward. I’d still prefer the human interaction with a real bartender… or, barring that, I might be more inclined to use a touchscreen and a vending machine layout, though that could prove more challenging in an inebriated state. What do you think? Would you want to order from James?