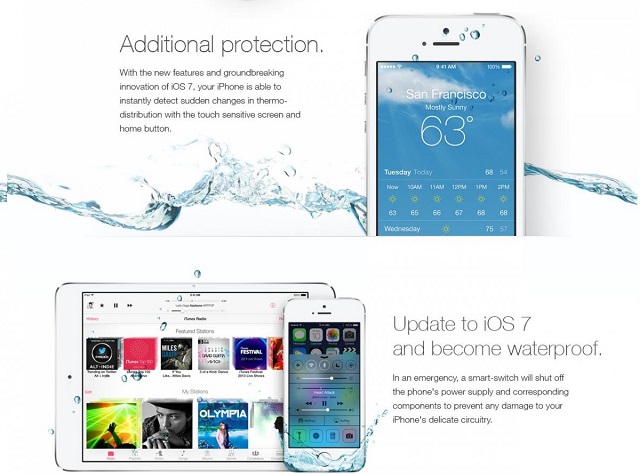 Apple iOS 7 is a pretty impressive upgrade from past versions of Apple’s mobile OS. It has a redesigned look, plenty of new features and even turns your phone waterproof – except it doesn’t. A fake iPhone ad is going around the web, extolling the virtues of iOS 7’s new (and fake) waterproof feature. The ad has been passed around several social media sites, and elsewhere.

We have to admit the styling is very Apple-esque, and very deceiving if you are the less-than-tech-savvy type. The ad explains that iOS 7 has the ability to shut off your phone’s power supply and other related components to prevent any damage to your iPhone in the event of an accidental situation where you device lands in water. The ad also claims iOS 7 allows an iPhone to detect sudden change in “thermodistribution”.

Even if the iPhone did magically shut off and protect components (which it doesn’t), that wouldn’t make the phone or its components waterproof. At best it would protect your flash memory or something (even that seems unlikely) – but would destroy the rest of your phone.

Of course, no one would ever believe or fall for this fake ad – right? Right?…. Wrong.

Twitter has already seen several tweets regarding broken phones and the like, due to daring iPhone owners’ attempts to test out this fake feature. That said, it’s possible the tweets themselves are also fakes, meant for humor.

Either way, we wouldn’t be surprised if at least one person on the web legitimately believed this claim, even if they didn’t try it out.