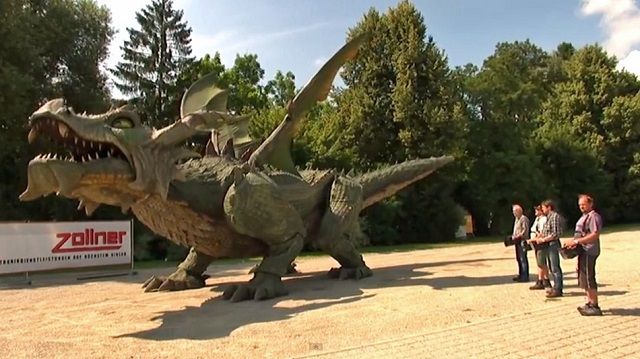 The dragon that you see in the above image certainly looks scary, right? If you don’t think so, you might change your mind when you learn what this thing is capable of doing! Known by the name Tradinno (a combination of tradition and innovation), the dragon is a big robot which can walk and spit fire.

Created by Germany’s Zollner Elektronik AG, Tradinno is a main attraction of Drachenstich or “Slaying of the Dragon”, a traditional folk play which has been performed every August for the past 5 centuries at Further Drachenstich in Bavaria, Germany.

In the past, the performance made use of a mechanical frame as the dragon, which was controlled by four people from the inside. Then Tradinno, which is fully controlled by radio, was introduced to the festival back in 2010.

Tradinno not only weighs in at 11 tons, but this behemoth is also 51 feet tall and has a wingspan of 40ft. The robot has achieved the 2014 Guinness World Record for the World’s Largest Walking Robot. The fire coming out of it is fueled by liquid gas. The fuel and 21 gallons of fake stage blood are stored below Tradinno’s polyurethane and glass-reinforced outer layer.

Check out the video below to take a good look at Tradinno. Imagine Tradinno running towards you, all while breathing fire in your direction. Pretty impressive – and even somewhat scary – stuff.