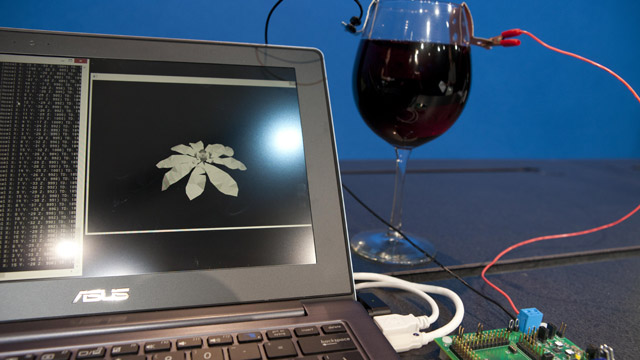 You might have seen people powered by booze, but what you see above is the energy from a glass of red wine powering a new very efficient processor from Intel. No batteries required here folks.

The new very, very low power chipset has been shown off at the Intel Developer Forum. Intel’s Dr Genevieve Bell placed two electrodes in the wine glass. The electrodes reacted with the acetic acid in the wine and a tiny current was produced which was enough to power the processor.

Intel thinks that the future belongs to these incredibly low power chips, which could especially be useful for connecting people living in less developed areas of the world. Internet.org might want to take a closer look at the new processor.

According to Bell, “Some people turn water into wine, here at Intel we’re turning wine into electricity. It’s possible to start to imagine a world of incredibly low power but also with high performance, which will help unburden us, help us do things that are remarkable and gives the ability to power things like constant sensing, communication, and computing – all of which are necessary for our mobile future“.

Other new tech which was shown off includes a voice recognition system which eliminates the need for passwords for mobile phones. The system recognizes the owner’s sound and automatically unlocks the phone. Things apparently went well during the demo, but it might not work in noisy environments.

Another innovation involves a phone recognizing the way a person walks, based on how they are holding it – via an accelerometer. When the phone recognizes the owner’s walking style, the phone will be unlocked.