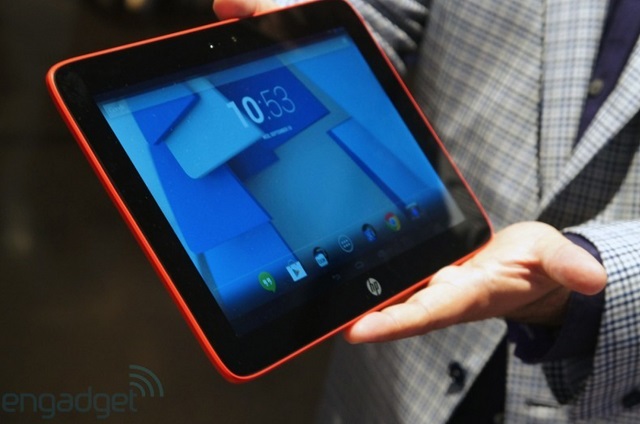 Starting with the HP Slate 7, HP broke away from its traditional Windows roots (aside from WebOS) and crossed over to the Android world. Since then, the company has also released an Android all-in-one PC and even an Android-powered laptop/tablet hybrid.

Today the company makes it clear that Android will continue to bee a big part of their game plan going forward, with the release of four new tablets running Google’s popular OS.

Two of the tablets are 7-inchers. The first of these is the HP Slate 7, which is powered by a Tegra 4 processor and is based on the Nvidia Tegra Note reference design. That means it also has a stylus, 128 x 800 resolution display, a VGA front cam, 5MP rear cam and Bluetooth onboard.

Today the HP made it clear that Android will be a big part of their game plan going forward, with the release of four new tablets running Google’s popular OS.

As for the other 7-inch tablet? The HP Slate 7 HD follows in the footsteps of the original Slate 7, by favoring a low-cost processor over a bigger-brand CPU. The 7 HD has a 1280 x 800 display, a Marvell CPU, Beat Audio, a front/back cam and microSD support. There will also be a 4G/3G model.

Next up, we have the HP Slate 8 Pro. Like the HP Slate 7 Extreme, this tablet features an Nvidia Tegra 4 processor. Despite the name, the display is actually 7.98-inches and features a 4:3 aspect ratio. There will also be an 8MP back cam, 2M front cam, a resolution of 1600 x 1200, and microSD.

Finally we have the HP Slate 10 HD (seen above), which features the exact same specs as the 7 HD, with the exception of a larger 10-inch display. This includes the same 1280 x 800 display and Marvell CPU. There will also be a 3G/4G model, too.

So when are these new tablets coming, and how much will they set you back? While pricing has yet to be revealed, HP has confirmed that all four tablets will make their way to the United States sometime in November.